Feed it, Don’t Eat it

Health and fitness is becoming a new trend that has been gaining increasing popularity throughout the years. Recently, many companies have been launching vegan options in an effort to better accommodate the non-meat 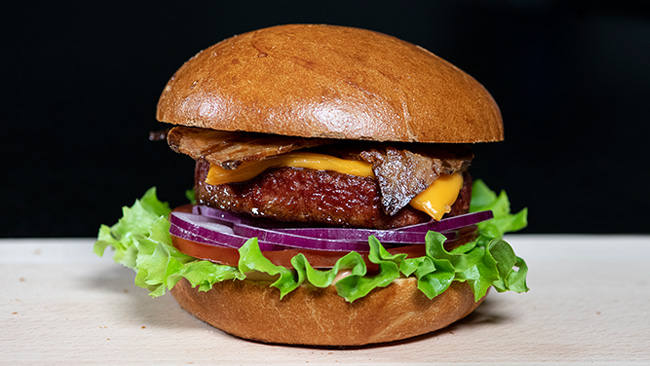 and/or dairy eating population. Plant-based diets have since increased to 11% in the past year alone (Wiener-Bronner, 2019.) According to the CNN article, Jefferies, an American multinational investment bank, claimed that this initiative “could reach about $140 billion in sales over the next decade, capturing about 10% of the global meat industry, up from $14 billion currently” (Wiener-Bronner, 2019; Jefferies, 2019.) The first company to launch vegan choices aside from their normal foods is Nestle. Nestle is leaning into the plant-based trend by offering new vegan options for bacon and cheddar cheese. Along with this announcement, Nestle also decided that they would launch a plant-based patty that looks and tastes exactly like meat called the “Awesome Burger” (Wiener-Bronner, 2019.) Along with launching these three new products, Nestle is expanding its company to restaurants in order to keep up with and compete with other companies also engaging in the rapidly growing plant-based products initiative. Another reason behind the plant-based alternatives is because people want to eat fewer animal products to reduce greenhouse emissions. The meat industry believes that within the next decade, the alternative meat sector could reach about $140 billion in sales (Wiener-Bronner, 2019.) Many other companies along with Nestle including Kroger, Hormel Foods, Spam and AppleGate, Tyson, and Kellogg have come out with new vegan options as well  (Wiener-Bronner, 2019.)

After reading this, you may be questioning what is making people want to jump onto the band-wagon of this vegan plant-based diet? Well, the answer to that is conformity. Conformity is when someone changes the way they behave in an effort to be congruent with the actions or ideas of a group. Nowadays, it is very common that people are deciding to change their diets to plant-based because the health and fitness trend is becoming so popular. People are researching all the chemicals and products they are consuming when they eat meat and dairy and are deciding that it is not the lifestyle they want for themselves. This concept relates to the article because vegan diets are becoming more and more popular. Many people are learning about the health benefits of less meat, so they are conforming to what society is doing. The more people that start these diets, the more people start to conform to this vegan diet as well. Normative social influence, which branches off of conformity, is when a group does not want to be left out, and they want to be accepted by others. This concept relates to our article because the reason why the vegan trend is becoming increasingly popular is due to the general population engaging in normative social influence. The general population is noticing more and more people engaging in vegan habits, and in an effort to feel accepted by this group, they start to conform and change their diet to a vegan one. Therefore, this act of conforming to the vegan population then reduces the rejection they may have felt from the vegan population if they did not conform. Another concept that would relate to this article is evaluation apprehension. Evaluation apprehension refers to an individual’s concern for how others are evaluating them. This relates to our article because Nestle, and all of the other companies who embarked on this vegan initiative, did so because they were concerned about how they would be evaluated by the growing vegan/health/fitness population. From the company rolling in three new products, if this task is easy to do, then coming out with another new vegan product would not impair the companies ability to do so. If successfully releasing a new product becomes a difficult task to accomplish, then that would impair the company’s behavior negatively. Therefore, due to their concern for how they would be evaluated and how that evaluation would affect their company’s growth, they embarked on the vegan initiative.