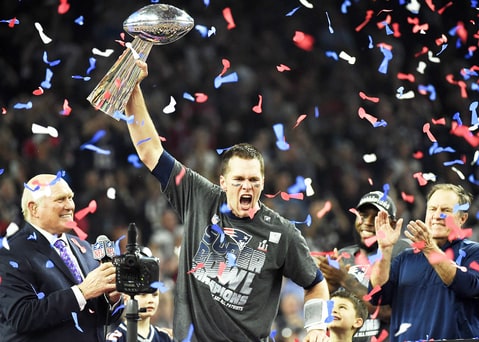 The city of Boston has been glorified by historic sports teams like The New England Patriots, which has pleased the city with five Super Bowl wins since 2002. Led by arguably the greatest quarterback of all-time Tom Brady and multiple players with Super Bowl experience, a 21-3 halftime deficit during Super Bowl LI was “obviously” nothing to worry about for their supporters and some players.

After the Patriots had completed the greatest comeback in Super Bowl history, many of their fans claimed “they knew it all along.” Even one of their own players, Matthew Slater claimed to be calm about the huge hole they had put themselves in. “No panic. We are squatting 80 percent of our maxes on Super Bowl week. We worked for this,” he said. Another one of their players, Chris Hogan said, “There wasn’t a doubt in my mind. We have one of the best quarterbacks that ever played the game.”

The look on most of the Patriots and even their fans didn’t express much confidence when they were down 25. Broadcasters praised the play of the Atlanta Falcons as cameras kept showing a look of defeat in the eyes of Tom Brady, who AFTER winning the game claimed he “wasn’t thinking much” when the Falcons went up 28-3 during the third quarter.

Optimism? Cockiness? Both? Or just your average case of the hindsight bias. Also humorously known as the I-knew-it-all-along phenomenon, hindsight bias occurs when we don’t expect something to happen, but when it does, we claim to have “known it all along.” The hindsight bias is composed of three levels. Memory distortion, inevitability, and foreseeability (Roese 2012).

These three levels were all clear and seen during Super Bowl LI.

There’s no question some Patriots and their fans had to have given up during the start of the 4th quarter. The second they finally tied the game, all those negative thoughts quickly disappeared.

Before comeback: “Damn, it’s over. We lost.”

After comeback: “I knew we’d come back!” (Previous opinion gone like it never came)

One has to justify this complete change in opinion after the amazing comeback.

“The falcons didn’t have enough experience. Tom Brady’s the greatest, he played in 6 Super Bowls before this, he had to bring us back.”

“I knew we’d come back, and win!” (Or every other Patriot quote mentioned above)

The hindsight bias comes up frequently in sporting events, especially if you’re a “die hard” fan. Everyone loves “knowing” that it was going to happen, even after the majority has given up. Patriot nation didn’t look like they had much confidence when Stephen Gostkowski clanged the extra point field goal off the post to end the 3rd quarter. They didn’t look confident when Tom Brady was sacked for a fifth time during the 4th quarter. But with the Patriots being the historic franchise they are, who could have doubted this historic comeback???

Tom Brady’s Super Bowl LI Press Conference, “Been on the Other Side of Those Catches”(2017,February 05). Retrieved February 13, 2017, from https://www.youtube.com/watch?v=N1pkGdGHKWM

3 thoughts on “We Knew They’d Win”